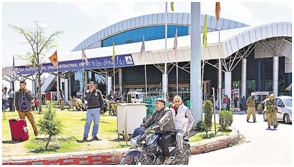 The Central Industrial Security Force (CISF) has started an audit of Jammu, Srinagar and Leh airports to ascertain the number of personnel to be deployed and loopholes to be plugged at these hubs before taking over their security as suggested by the Union home ministry. The report is expected to be submitted to the Home Ministry by the end of this month.

“We have started the audit but will not change the existing security infrastructure at these airports,” said a CISF official. “We want to ensure that there are no dark zones in and around these airport and if required, more CCTV cameras will be installed,” said the official. “A report (on the audit) will be submitted to the home ministry listing the requirement of personnel and equipment. We are ready for deployment by January next year,” the official added.

Security on the approach roads will be one of the major focus areas of the audit, considering terrorist activities in the region, according to the CISF official. The CISF is also likely to continue with the practice of baggage stamping at these sensitive airports. A joint team of CISF, Airports Authority of India (AAI) and Bureau for Civil Aviation Security (BCAS) was formed last week to decide the number of personnel to be deployed and loopholes to be plugged at these airports. According to a civil aviation ministry official, to bring uniformity in the country’s aviation security, the CISF has been asked by the home ministry to conduct an audit of these three airports. There are 100 operational airports in the country of which 61 is secured by CISF.

“A preliminary survey of the Jammu airport conducted in 2012 showed we will need 300 personnel for round the clock security of the airport. But as per the latest estimate we will need 400 personnel for Jammu alone,” said the official quoted above. “The numbers for Srinagar and Leh will be fixed later as these are also busy airports,” said the CISF official. Jammu airport handled 14.43 lakh passengers in 2017-18, up from 11.59 lakh in 2016-17 while Leh handled 6.92 lakh in 2017-18 compared to 5.63 lakh, the previous year. Srinagar is the busiest among the three airports in Jammu and Kashmir with 24.40 lakh passengers using it in 2017-18 . “Jammu airport’s capacity is 6.5 lakh though it handled 14.43 lakh passengers while Leh airport’s capacity is 2.5 lakh and it handled 6.92 lakh passengers. While Srinagar airport which can handle 30 lakh passengers is expected to reach its capacity by next year. We will deploy extra personnel during peak hours to clear the rush,” said the CISF officer