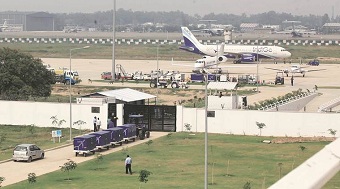 As per the inspection carried out, several shortcomings have been pointed out. Out of approximately 18 internal hydrants checked, majority were non-functional, five hydrants at the international terminal were out of order, about five hydrant cabinets of the domestic terminal lack signage and are hidden by boards put up by under construction shops.

“Most of the hydrants lack pressure gauges. Many units lack hose pipe, hose reel and other components. “Most of the hydrant units were found to be locked with no key or instrument nearby to open them in case of emergency. In the basement area it was found that clips have not been removed from the heads of a few sprinklers, which can hamper their functioning in case of an emergency,” he said. In view of the shortcomings, the NoC regarding fire safety cannot be granted to the airport, he said.The conditional NoC given to the airport has already expired on July 19, 2018.

They have been directed to ensure immediate compliance of the fire safety norms as per NBC (National Building Code of India), 2016 guidelines and to submit an affidavit regarding the same, he said. Meanwhile, CHAIl CEO Suneel Dutt said some of the fire equipment at the airport building were kept there for maintenance. “We have applied for renewal of the NoC. As some maintenance work was going on, there were some discrepancies. However, there was no major fire safety issue. Moreover, the company handling the fire services part in the airport building has assured that their technical team will have everything ready in the next few days,” Dutt said.

Singh said the municipal corporation was carrying out such inspections in other organisations too, including shopping malls, commercial buildings and educational institutions in Mohali.