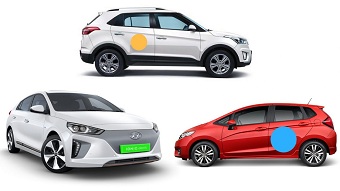 The Centre plans to introduce colour hologram-based stickers for private vehicles in the National Capital Region (NCR) to identify the fuel they use and the year in which they were manufactured, starting on October 2, the Supreme Court was informed. The stickers will enable local authorities to identify and stop vehicles powered by a particular fuel type and of a certain age from plying on high-pollution days on specific routes.

An apex court bench led by Justice MB Lokur took on record the Centre’s affidavit, which suggested light blue colour stickers for petrol- and compressed natural gas (CNG)-based cars and orange stickers for diesel-powered vehicles. The bench was hearing a case on air pollution in the NCR centred on Delhi. The court has in the past issued a slew of guidelines to curb rising pollution levels in the city.

“After introduction of coloured stickers, the use of more polluting vehicles can be restricted in a congested or a polluted zone temporarily or permanently depending on the pollution level. This decision should be taken by the local authority based on Air Quality Index of the area,” read the government affidavit filed before the top court.

Advocate Aparajita Singh, assisting the court in the case, welcomed the Centre’s decision to accept the Supreme Court-appointed Environment Pollution Control Authority’s (EPCA) proposal for colour-coded stickers. On a request by Toyota Kirloskar, the bench asked additional solicitor general AS Nadkarni to consider providing green-colour stickers for full hybrid vehicles. The company’s lawyers, senior advocate Ashwani Sharma and Vijay Sondh, objected to the government’s move to issue blue stickers for the hybrid segment, saying it was unfair to equate hybrid cars with Euro-6 vehicles as emissions were much less.

Justice Lokur asked Nadkarni to explore the option, saying: “Things seem to be improving,” the bench said. “Hopefully it will improve and we would get to see electric cars. You must take a decision and give a separate colour sticker to hybrid category.” For electric vehicles, the ministry has proposed a number plate with a green background and amended the rules accordingly. The requirement of putting up colour-coded stickers will not be apply to electric vehicles. The government ruled out EPCA’s advice to follow the Paris model of colour-coded stickers for identification of vehicles based on their emission standards.