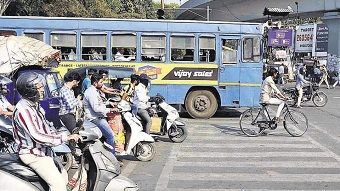 The Pune traffic police collected Rs 7 crore more in 2018 as compared to the previous year after implementing the CCTV-drive e-challan system. In 2018, 2.5 lakh more violators were fined as compared to 2017, according to the information released by the Pune traffic police department. The department took action against 18 lakh residents for traffic violations in 2018. Of these, 6.33 lakh cases were registered through the CCTV (closed-circuit television) surveillance system.

“Apart from active traffic policing, the major reason behind higher number of cases in 2018 are the CCTVs installed across the city that capture the violations,” said Tejaswi Satpute, Deputy Commissioner of Police (DCP), Traffic. The CCTV system captures the images of violators at traffic junctions and transmits them to the command and control centre of the traffic department through which cases are registered and fines are collected by the traffic personnel.

Pranil Jamge, a traffic constable, said, “Due to the use of technology, we have the past records of traffic violations which have helped us to fine the offenders. We are now in a position that we can give the exact time and details about the traffic violations. Every day between 3 pm and 7 pm we conduct a drive across the city where we collect pending fines from violators using the records that we have with us.”