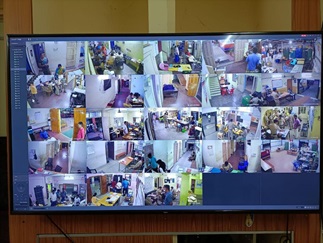 Even as Madurai City Police are watching the streets and roads with the help of hundreds of closed circuit television cameras, all the police stations would also be monitored in the same manner by the top officials .

The Commissioner of Police, two Deputy Commissioners of Police and the Intelligence Section of the city police have exclusive access to the live video footage along with the audio of conversation between the police personnel and petitioners coming to the stations.
These are standalone cameras independent of the CCTV network already made available in the police stations.

The station monitoring system has been initiated by Commissioner of Police, T. Senthil Kumar, based on his experience in Salem. “This is basically to ensure that petitioners are promptly attended to and their grievances are properly heard,” Mr. Senthil Kumar said.

The system was initially to have a data entry of all petitioners, with time and details of complaints, which would be accessed by senior police officers. However, the Deputy Commissioner of Police (South), R. Srinivasa Perumal, came up with the visual monitoring system.

High-end cameras that could pick up the environmental sound and could be rotated by the officials sitting in their chambers have been installed in 25 out of 28 police stations.
The cameras are fixed in such a way that the reception desk and the hall are covered.
“We can always monitor the police stations and intervene anytime over phone and ask the police to act fast and properly,” the Commissioner said. Mr. Srinivasa Perumal said the police had been told to ensure that the petitioners and others called for enquiry were within the reach of the camera.

“This is not only to ensure that members of public are not harassed, but also help the police to avoid unnecessary allegations of custodial torture,” he added. The presence of CCTV would also discourage unnecessary visits by influential persons to police stations. The station monitoring system which is now under testing would be launched very soon.