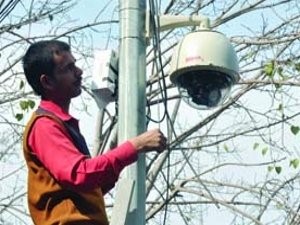 Taking note of the recent trend wherein CCTV footage has been of great help for police to crack down on criminal cases, traffic violations and terror activities, Goa police plans to install 660 high resolution CCTV cameras which would be remote controlled and capable of capturing traffic flow and abnormal incidents at 250 locations across the state. The same image would be transmitted in real time through a high bandwidth optical fiber-based network to the respective traffic control rooms at Panaji and Margao, all police stations across the state and security units.

The cost of the total project is estimated to be around Rs. 20 crore. Inspector General of Police (IGP) Sunil Garg said that the proposal is in the process of being sent to the government.Presently, 96 cameras are in operation at different location across the state, including Panaji, Margao, Vasco, Quepem and Sanguem. CCTV footage has aided the traffic cell in issuing 18,280 notices to traffic violators, besides helping the police crackdown on many criminal cases. Recently, Panaji police were able to solve the St Inez chain snatching case.