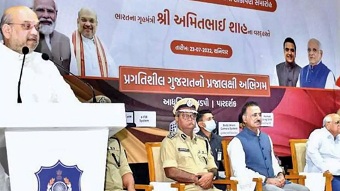 The city’s crime-fighting vision is set to dramatically improve from this month when the government starts the process to plug CCTV feeds from private entities — including residential societies — into the state’s main command and control centre, Trinetra, in Gandhinagar.

Next month, the state home department will begin constituting committees, making institutional arrangements, undertaking security assessment studies, and informing senior police officials to take appropriate steps. “All residential societies will have to install IP-based cameras of stipulated specifications,” said a senior police official. “The rules pertaining to the Gujarat Public Safety (Measures) Enforcement Act, 2022, have been notified and in August we will begin the implementation.”

An additional surveillance network of 10,000 CCTV cameras will be installed across the state covering 51 towns, with sharp focus on the state’s entry and exit points with Rajasthan, MP, and Maharashtra. “AI-based video analytics tools will make it possible for us to track suspicious individuals and vehicles across various CCTV networks,” said a senior Gujarat Police official. The Trinetra centre will link 34 district-level command and control centres.

Speaking at the inaugural function of smart policing projects, in Gandhinagar, Union home minister Amit Shah said: “In all, 96% of our police stations across India have been computerised and are linked.” He added: “Gujarat has been at the forefront of police modernization. I appeal to the government here that it is now necessary that cameras be installed at all places including railway stations, private societies, ports, and pilgrimage centres.” He said all feeds should be connected to the command and control centre.

“An Indian Cyber Coordination Centre has also been created. All advanced technologies have been purchased by the central government,” Shah said. “No state government needs to purchase this technology separately, as states can link to the Indian government’s servers.”

Chief minister Bhupendra Patel said: “A state-wide rollout of body-worn cameras for Gujarat Police has improved our policing and helped gain citizens’ confidence.” Patel, Shah, and Gujarat’s minister of state for home Harsh Sanghavi also flagged off the 80-vehicle anti-human trafficking squad on Saturday. “With the help of the CCTV network under the VISHWAS project, we have been able to solve 1,500 theft cases, 950 accident cases, and more than 700 other cases,” Sanghavi said.