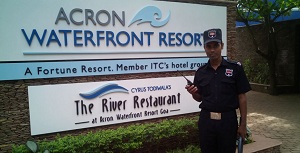 An official said that, basically, the concern of the government is safety of the people hired by the security agencies. The role of private security personnel came under the scanner during the police investigation in the sensational murder of the perfumer Monika Gurde in Sangolda in October 2016. It was found that the security guard of the building where she resided – Rajkumar Singh from Punjab – had allegedly committed the murder.