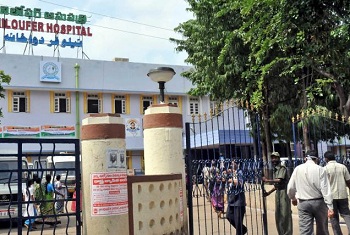 Towards providing better security cover to healthcare workers and patients in top teaching hospitals, the State government has accorded permission to Telangana Special Protection Force (TSPF) for deployment of security personnel within the hospital campuses. To be able to deploy TSPF personnel in eight medical colleges, the State government has also accorded administrative sanction of Rs. 5.05 crore.
Providing additional security at teaching hospitals has been a long-pending demand from healthcare workers, who have come under attack on several occasions in Hyderabad from unhappy relatives of patients. In fact, there have been several occasions in the past when the medicos in the State have boycotted duties demanding special protection cover on the hospital premises.

The State government has decided to provide round-the-clock security at Osmania General Hospital (OGH), Gandhi Hospital, State-run Maternity Hospitals in Sultanbazar, Petlaburj, Niloufer Hospital, MGM General Hospital in Warangal and Government Maternity Hospital, Hanamkonda and CKM Hospital, Matwada in Warangal. According to health officials, the Director General, TSPF had sent a detailed report and proposed deployment of one inspector, one sub-inspector, 18 head constables and 56 constables in the eight teaching hospitals in the State. From now on, each of the chosen hospital will have two head constables and six constables.

Niloufer Hosptial, which has witnessed frequent attacks by relatives of patients on attending doctors and has also suffered damage to hospital infrastructure, will have two head constables and 14 constables. One inspector and one sub-inspector will be exclusively supervisory officers in the two State-run hospitals in Warangal.
A Government Order (GO MS. No 79) for round-the-clock security and administrative sanction of funds was also released by the government a few days ago.